If you own any of my books or been to any of my speaking engagements, you likely know I never use rice flour in my baking – it is nutritionally void and has a terrible texture. But I do like it for thickening because it is really smooth and works well in pretty much everything. This thick, earthy gravy, rich with the flavour of dried and fresh mushrooms is open to your interpretation: add your favourite herbs, puree it smooth, make it thick or thin. There is loads of room for experimentation. (Here it’s shown over roasted potato wedges).

Put the dried mushrooms in a large bowl (with a capacity of at least 6 cups). Top with the boiling water. Let stand 30 minutes.

Heat the olive oil in a large saucepan. Add the mushrooms, and a bit of salt and pepper. Cook over medium heat for about 15 minutes, until mushrooms are golden brown. Add the shallots. Cook until softened. Add the garlic and continue to cook until fragrant, about a minute longer.

Drain the dried mushrooms, reserving both the mushrooms and the liquid. Chop the mushrooms, and add to the pot along with the soaking water and the thyme. Bring to a boil, then reduce and simmer for 15 minutes.

I realize that it isn’t the most authentic, but it certainly fits the bill for a mole-inspired dish. Based on an original, but with local-to-me ingredients, this sauce this version includes mushrooms as the main event and is served alongside a rice that plays up the right flavors. If you can make authentic mole, please come over for dinner. 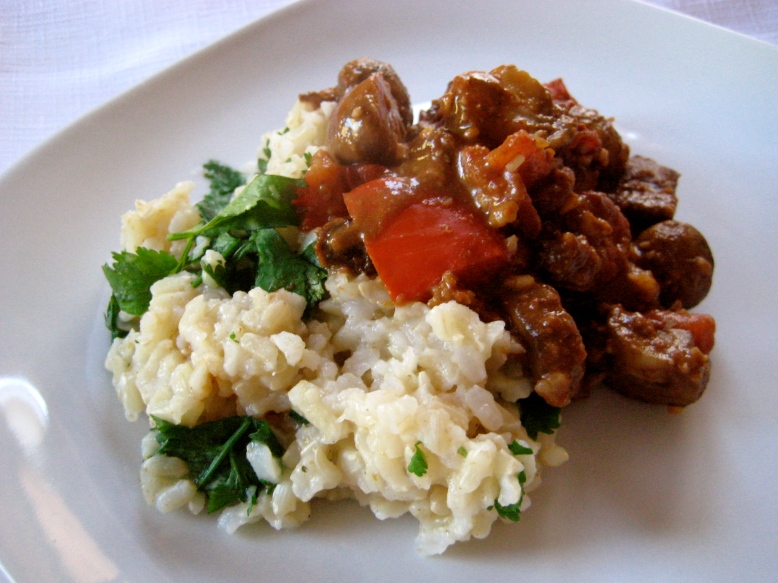 In a large skillet over medium heat, put the almonds, tortilla pieces, and sesame seeds. Toast until fragrant and starting to brown, about 2 minutes, careful not to burn the ingredients. Remove the skillet from the stovetop and allow the ingredients to cool to room temperature. Once cool, scrape the almond mixture into a food processor. Add the chili powder, cinnamon, coriander, cumin, cloves, and a few pinches of salt. Pulse until the mixture if finely group.

Add the cocoa powder and about half of the water to the mushroom mixture. Mix well, then stir in the rest of the water. Turn to high heat and bring the mixture to a boil, then reduce to low heat and simmer for 8 to 10 minutes, until thickened, adding extra water if the mixture becomes too thick.

Rinse the rice with cool water until the water runs clear. Put the rice, cumin, onion powder, coriander, oregano, a generous pinch of salt, and a few grinds of black pepper in a saucepan, along with the required water on the package’s directions. Cook as directed. When it is finished, stir in the lime zest, lime juice, and cilantro, adding salt and pepper to taste.